The Serengeti Migration in Tanzania


The Serengeti Migration is a large-scale movement of different species across the Serengeti, Ngorongoro and the Maasai Mara (the latter being in Kenya). Tied to seasonal changes, it is led by 1.5 million wildebeest and 300,000 zebras in search of food and water. The great migration cycle is continuous and takes place along an almost circular path. It is a trek that throws up challenges and obstacles for the animals at every stage. But we must remember that it is part of the circle of life and it serves as a process of natural selection. 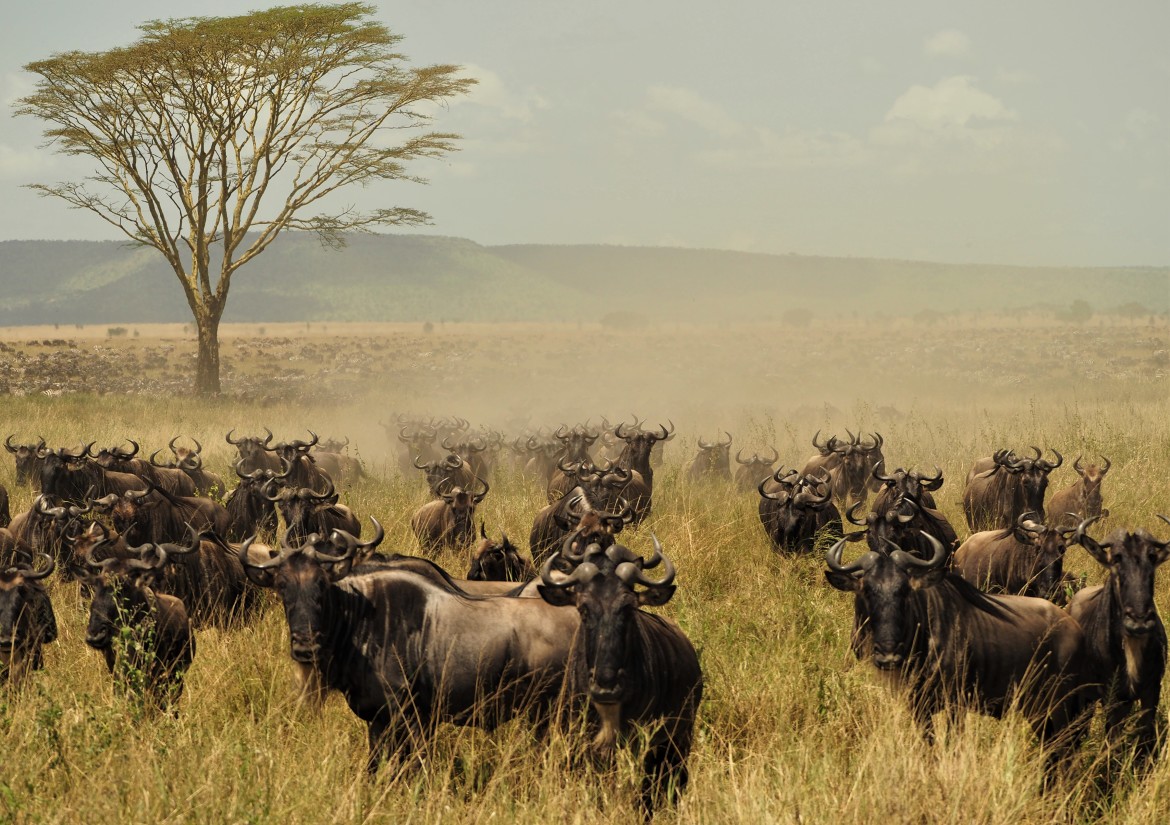 In the early part of the year, between January and March, the southern plains of the Serengeti become covered in lush, nutritious vegetation. A combination of a specific variety of grass, fertile volcanic soils and the onset of the short rains, this phenomenon drives the arrival of the “mega herd” and the dawn of the calving season. At this time, half a million wildebeest give birth in the space of two months.

Greenery is crucial at this stage of the Tanzania great migration cycle, as it provides much needed nourishment for the wildebeest cows and calves. The glut of calves is part of the wildebeests’ survival strategy: the more calves born, the more survive during a period that sees one of the largest build-ups of predators on land. Visiting during this period offers two advantages. Firstly, it is the only time the entire migrating herd gathers together in the flat plains, so you can observe a truly impressive mass herd. Secondly, new born calves present an easy kill for predators, so it is during this time that you have the best chance of seeing a kill in the Serengeti.

As the rains taper off and the pools of water brought by the rains begin to dry out, the migrating herd begins to move westward in search of greener pastures.  As they advance, the landscape and vegetation changes from flat, open grass plains into undulating riverine acacia woodland. With these changing conditions, the herd is forced to split into smaller satellite groups rather than remain one large mass.

Driven by their dependency on water and grass, the herds press forward, threading their way towards the Western Corridor, their sights set on the Grumeti and Mbalageti rivers. These rivers present one of the major geographical hurdles in the path of the Serengeti migration. The Grumeti and Mbalageti rivers guarantee water supply, but with danger constantly lurking. Here the wildebeests’ arrival is anticipated not only by crocodiles in the rivers, but also by other predators. It is good to mention that these river crossings are hard to observe, due to accessibility challenges in the physical environment. As a result, the Grumeti and Mbalageti river crossings are less well-known to tourists, who prefer to watch the iconic river crossing in the Northern Serengeti, which happens in July. 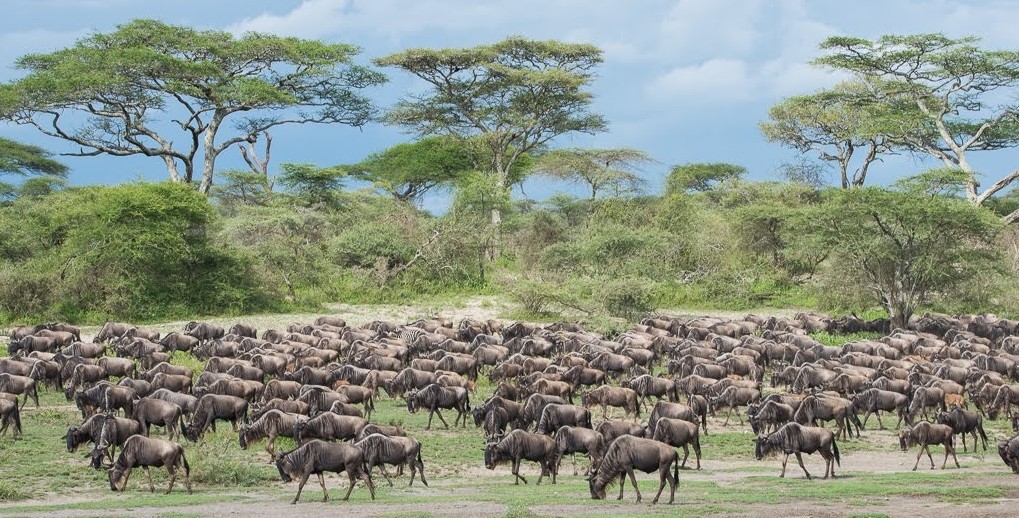 By the end of June, the annual rut commences: a period of approximately one month during which over half a million female wildebeest get impregnated. This is a one of the more dramatic phases of the Tanzania migration. Driven by the females coming into season, the male wildebeest establish temporary territories. Once a male has declared his claim he patrols aggressively, protecting and defending his domain. Neighboring or unsettled males will often challenge and test the boundaries he has set. This is an intense and demanding time for the males, as they attempt to attract females into their territory and mate with them, they must also fend-off other males. It is a period of heightened stress that requires a high investment of energy and resources. This process is also key, as it ensures that only the fittest and strongest males in the herd get to reproduce.

As the herd passes through, and the numbers begins to tail off, it becomes less important for the males to protect and maintain their territories.  At this time of year, higher ground guarantees fresh pastures, and so the journey continues in a north easterly direction, through Grumeti and Ikorongo reserves.

It is now the end of July, and the Mara river in Northern Serengeti awaits the arrival of the migrating herds.  For the next 2-3 months, the constant arrival of thousands of wildebeest and zebras and the subsequent river crossings is undoubtedly the most iconic and fascinating phase of the Tanzania great migration for tourists.  Unlike in the southern plains where the herds converge and are more concentrated, here in the northern Serengeti, in an area called Kogatende, they arrive in smaller groups.

As the herds arrive on the banks of the Mara river, they are presented with the final and most difficult hurdle of the migration: crossing a crocodile infested river, as other predators prowl. The crossing presents further physical challenges because the river has steep vertical drops on both sides.  From October the herds slowly progress in a north easterly direction towards the Masai Mara, which is in Kenya. 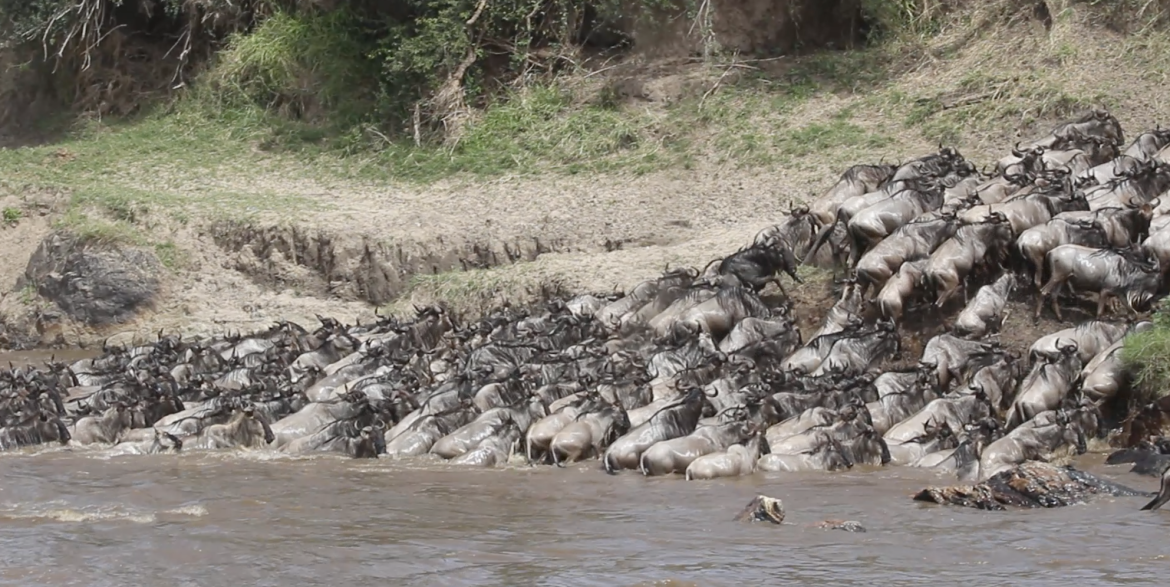 After crossing into Kenya, the migrating herds will spend 1-2 months in an area known as the Mara Triangle. In November, they begin their trek south via Lobo and the Loliondo game-controlled area towards the great southern plains of the Serengeti. Due to the limited accessibility to this area, it is difficult to view the migration during this stint of their journey. However, by mid-December the herds start to arrive in Gol kopjes on south eastern part of the Serengeti and come January, the Tanzania great migration cycle begins again.

Misconceptions about the migration:

A common misconception among visitors to Tanzania is that the Mara river serves as the border between Kenya and Tanzania. Some visitors believe that once the wildebeest cross the river, they have entered the Masai Mara and therefore Kenya. In actual fact, from the river bank there is another 15-20km before you reach the border between the Serengeti and the Masai Mara. While migration river crossings can be observed at the Mara river specifically, there is a bridge across the river which allows visitors freedom and flexibility to explore the broader area. You will go on games drives on both sides of the river, all while remaining in the Serengeti.

Another misconception is that, once a herd crosses the Mara river, they head further north and do not cross the Mara river again until the following year. In reality, a herd can cross the river one day and then cross back the very same day, or just a few days later. Often, the source of this misunderstanding is the belief that the migration is linear – that it has a beginning and an end. In actual fact, the migration is a cycle of constant movement and it follows an almost circular route. There really isn’t a start or an end point: with over a million animals in the herd, it has to be constantly on the move.

Has this sparked your enthusiasm?

When it comes to wildlife spotting nothing compares to a sighting of Tanzania’s Great Migration. In terms of numbers and how dramatic it is, this is by far the most amazing natural spectacle you will ever see. Has this sparked your enthusiasm? Have a look at our Migration sample itinerary.